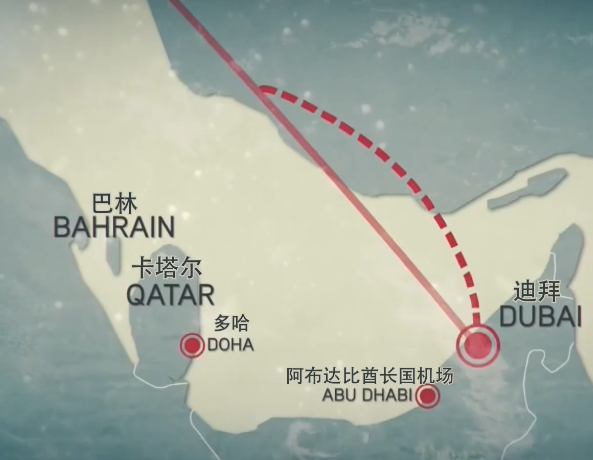 Doha Diversion
The investigation examined the possible outcome of an alternative scenario of diverting to DOH at the first indication of the fire. From the point where the diversion to Doha was advised there were 100 track miles to DOH. A performance analysis based on a 3°-4° descent angle and a descent speed of 300kts, indicate that from the notification until overhead DOH could have been achieved in approximately 17 minutes. Adding time for speed reduction and radar vectoring to the approach configuration, approximately 20 minutes would have been required.
Assuming the systems failure timeline remained linear, a similar level of controllability problems would have been apparent, including the oxygen supply problem and the elevator and speed brake problems identified earlier.
Additionally, the landing gear would not have been able to extend unless the crew used the manual gear extension procedure. How an auto landing without landing gear would have concluded is not known.79 The aircraft was within 20,000 lbs of the take-off fuel, fully loaded and in all probability would have made a wheels up landing.

A descent, based on the fire suppression methodology of venting airflow and depressurisation of the cargo hold to reduce the available oxygen, could have exacerbated the fire, accelerating the cascading failure scenarios and the cascading failures.
However, it is clear that a major difficulty faced by the crew was a consequence of the course change back to DXB. Once the smoke prevented the crew from changing radio frequencies, the communications, navigation, and surveillance difficulties increased. On a course to Doha, the flight would have been in direct contact with BAE-C, and if relays were required as the airplane descended toward the airport, direct landline communication between BAE-C and Doha Approach would have greatly simplified the radio communication. ATC radar surveillance and coordination would also have been simplified. The SSR data would have been available to the ATCO and there would have been more available ambient light due to the longitude of Doha.

Analysis of the diversion to DOH and the likely outcome is speculative as the crew incapacitation and smoke/fumes in the cockpit would have prevailed as the rate of failure on the timeline of the failures was linear regardless of the destination. In addition, the aircraft control was seriously compromised by the fire and consequential events, a factor that was not apparent to the crew as they could not view the primary instruments, or the and alert and notification display. The likely outcome of the diversion to DOH is therefore inconclusive, although the communication and task saturation issues experienced by the remaining pilot would have been negated by a DOH diversion. The communications difficulties with the relay aircraft/BAH-C/EACC/DXB chain of events was the result of the course change toward DXB.

Ditching Option
The option to ditch was reviewed during the simulator sessions in Seattle80. Although feasible, the inability to see the instruments, particularly the radar altitude or outside of the cockpit window was problematic. The control of the aircraft descent with the AP was another issue that was unresolved.
Attempting to ditch using the auto flight functions was possible, however the last five hundred feet managing the rate of descent, attitude, speed and gauging the sea state in all probability precluded this as an option.
This exercise was inconclusive.