"Ethiopian Airlines is making immediate arrangements to fly its esteemed customers on-board the flight to their intended destinations."

The hijacker of an Ethiopian airliner forced to land at Geneva, has been arrested, Swiss police say.

Everyone on board was safe and the situation was “under control”, a police statement said.

“Hijacker held, situation under control, no injuries,” it said.

The Boeing 767-300 flight from Addis Ababa to Rome was reportedly flying over Sudan when it signalled a hijacking.

Ethiopian Airlines said one of its flights was “forced to proceed” to Geneva, but all passengers and crew were safe at the airport, Reuters reported. It did not confirm the plane had been hijacked.

It was not immediately clear who had seized the plane, or if any demands had been made.

A Geneva airport spokesman, Bertrand Staempfli, said a hijacked plane had landed early on Monday morning, without identifying the carrier.

The flight’s path, picked up on the site flightradar24.com, showed the plane circling numerous times over Geneva before landing.

The airport was closed due to an “unspecified security incident”, CNN reported.

An Ethiopian Airlines statement said flight 702 “on scheduled service departing from Addis Ababa at 00:30 (local time) scheduled to arrive in Rome at 04:40 (local time) was forced to proceed to Geneva airport. 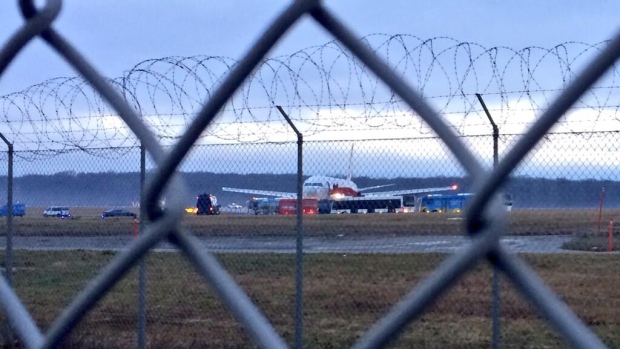 Ethiopian Airlines flight ET-702 to Italy has been hijacked and forced to land in Geneva. The hijacker was detained by local police. All passengers and crew are safe. Media reports say the plane was hijacked by its asylum-seeking pilot.